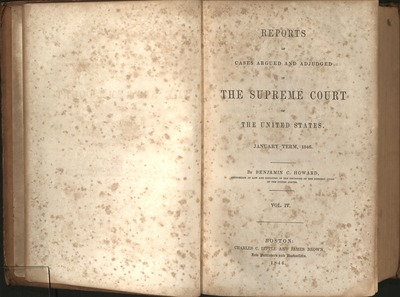 The Reports is a series of volumes containing the decisions of the United States Supreme Court on cases heard during the stated terms. Each case is arranged with a statement of facts, arguments, and court opinions. Volumes are numbered according to the court reporter, starting over when a new person assumes the role. This is volume four in the run of cases reported by Benjamin C. Howard (1791-1872), a lawyer from Maryland the fifth Supreme Court Reporter of Decisions.