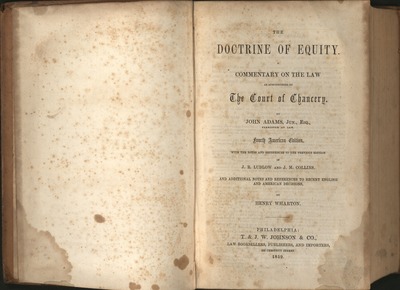 Adams, John. The Doctrine of Equity: A Commentary on the Law as Administered by the Court of Chancery. 4th American ed. Philadelphia: T. & J. W. Johnson & Co., 1859.

Equity - which operated as a separate system from common law - was used to provide remedies, like injunctions or specific performance of a contract, which were not available at common law. The Court of Chancery, which existed in Virginia until 2006, had its own set of procedural and substantive rules. This treatise would have been used by 19th-century lawyers practicing in the Court of Chancery as a guide to those specific rules.