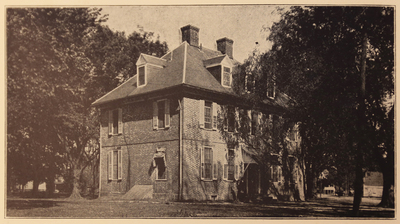 Brafferton Hall was built in 1723 from the proceeds of the Brafferton estate and was used as an Indian School until the beginning of the Revolutionary War. Occasional law classes were held in the building from 1780-1859. After the Wren Building burned in 1859, law classes were held mainly in the Brafferton. The building was restored in 1932 by John D. Rockefeller, Jr. After the restoration it housed the Department of Secretarial Science and the School of Jurisprudence until 1935. At this time the School of Jurisprudence relocated to Marshall-Wythe Hall (currently James Blair Hall).

Photo published in the 1922 Colonial Echo.